The coccyx curves gently forward, and flexes slightly when you sit down. Two medical papers (Postacchini and Massobrio and Kim and Suk) have shown that if your coccyx is not like this, or does not flex, then you are more likely to have coccyx pain than if you have a normal coccyx. The conditions that have been found to be associated with pain are: 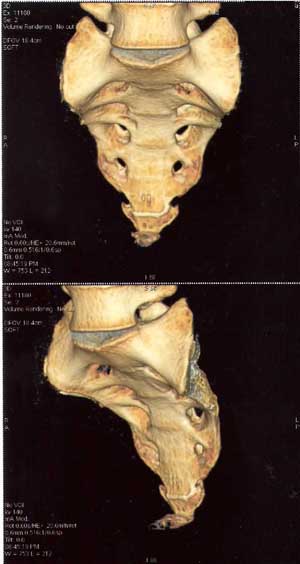 Some people with particularly long coccyxes have told me they found that this caused them pain. It seems obvious that a long coccyx is more likely than a short one to get damaged or press on the skin, but I can find no discussion of coccyx size in the medical literature.

These conditions do not always cause pain, but you are more likely to have coccydynia if you have one of them. Why they should cause pain is not always clear. In the case of a misaligned coccyx, it may be that the pain is caused by the coccyx pulling on muscles or pressing on other tissues. In the case of a rigid coccyx it may be that the tissues under the tip of the coccyx get damaged easily. Bursitis (a pad of irritated tissue, like a bunion) may be caused.

Postacchini and Massobrio studied x-rays of 120 coccyxes of people without pain and 51 coccyxes of people with unexplained coccyx pain. They found that a coccyx curving slightly forward was the most common type in the general public, with two thirds of people having this type. But among people with unexplained coccyx pain, two thirds had a coccyx that was strongly curved, angled or dislocated forwards. Therefore if you happen to have a coccyx that points forward more than down, you are more likely to get coccyx pain even if you don't have an accident.

This conclusion is supported by a recent medical paper by the authors Kim and Suk. They used x-rays to measure what they called the 'intercoccygeal angle' - the angle between the directions that the first and last coccyx segments pointed. They did these measurements for 3 groups: those with no pain, those with coccyx pain following trauma, and those with coccyx pain of unknown origin. What they found was that the 'no pain' and 'trauma' groups both had average intercoccygeal angles of about 50 degrees, but the group with pain of unknown origin had average angles of about 70 degrees.

The normal treatment of a misaligned or rigid coccyx is injections of corticosteriods. Surgery is not recommended. Treatment of a particularly long coccyx that is causing pain has not been discussed in the medical literature so far as I can discover.