Doctors often diagnose 'Broken tailbone’ or 'broken coccyx' when they see an x-ray or a scan like this: 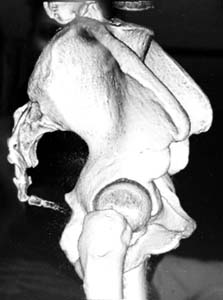 Here the tailbone is sharply angled inwards, and may cause pain when sitting and at other times. It can also press on the bowel, causing problems. But it is not a broken tailbone, because the bone itself is not broken. The tailbone consists of three to five small bones, attached to the sacrum. These bones are sometimes fused together in groups, but more often have thin disks between them, allowing the coccyx to flex a little.

If you damage your tailbone, such as by falling on your bottom, what normally happens is that the tailbone dislocates at one if its joints, or at the joint between the tailbone and the sacrum, rather than one of the bones breaking. Sometimes the two parts get fused, or ankylosed, in the angled position.

Doctors who have no experience in this area look at an x-ray of a tailbone bent at an angle, and assume that it is a broken tailbone, when it is really a dislocation.

This is an x-ray Dr Maigne showed of a tailbone with an actual fracture: 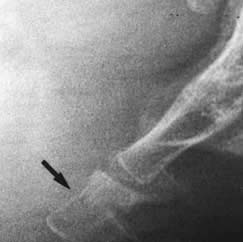