Coccygectomy and still in pain

My name is Helen, I am a 40 year old female living in Bristol, UK. 18 years ago an ex-boyfriend fell on me which resulted in a broken foot and damage to my coccyx. I have been in pain since the age of 22 and have tried many different treatments over the years to include physiotherapy, radiotherapy, numerous pain medications, pain management clinic, 2 day surgery cortisone injections, x rays and MRI scan etc. In the past consultants would not consider removing the coccyx and tried to find alternatives which did not work for me. Last year at the age of 40 I decided to go and see a consultant again at Frenchay hospital. I begged the consultant to carry out a Coccygectomy as the pain was continuous and ruining my life.

I had my surgery on 23/10/14 at the new build Brunel building at Southmead Hospital, Bristol (NHS). I was nervous but optimistic. I told my work that I would likely be off for a 6 week period. I arrived at 7 am and was one of the first to go into surgery around 8 am. I awoke in recovery room around 10 am. I was given iv morphine for the pain. The pain was pretty crazy and I was shocked to awake flat on my back. I was told my partner could not visit me in the recovery room but they would find me a bed ASAP. By around 2 pm I asked again if I could see my partner as I knew he had been waiting since 7 am and would be worried. I was vomiting a lot during the day. Eventually I was able to see my partner who came and sat with me and tried to help me to a commode. A bed became available and then unavailable and this continued into the evening. My partner went home around 11 pm and I eventually got a bed at midnight, after 14 hours in recovery room!!!!!!!!!! I was pushed on a trolley to the ward which has single rooms. I was looking forward to the single rooms but it was hell. Abrupt nurses, open door policy and the light apparently had to stay on as well as blood pressure monitor which inflated every 30 mins. Other patients pressed their alarm bell continuously throughout the night and I got no sleep at all.

The only drug I was given was paracetamol which did not ease my pain. The next day I continued to vomit but could not stand the prospect of another night in hospital so discharged myself. They let me go home and didn't seem to care that I was still vomiting. In fact one nurse came in, I vomited and she left the room saying "' leave you to it." As soon as I lifted my head from the pillow I would vomit. My partner had to push me in a wheelchair to main entrance and carry my suitcase as well as the nurse said there was no one to assist us. I travelled the 15 min journey home led in back of my car, vomiting the whole way home.

A district nurse came to visit on day 3 and around day 7 to change the dressing then did not return. I was so worried about getting an infection as pre-tests confirmed positive for MSSA. I took the advice of hospital and did not shower or remove dressing for 3 days. The pain was immense and I had to take high levels of oromorph and many other pain meds. The district nurses were fantastic and even took photo' so I could see my wound. The scar healed so nicely but the pain was still huge. I could not sit at all. I developed a haematoma on the left hand side and the hospital did not want to drain it so I have to try and break it down by heat, massage and exercise. Also I had severe constipation andfecal impaction which was horrendous and agony.

It is now 4 months since my operation and I am still in pain. I rarely leave my flat and don't drive my car. I have reduced my pain meds and now only take naproxen and paracetamol and meds for constipation. I returned to work today on a phased return. I have regular physio sessions and am in contact with an Occupational Health nurse via the telephone. I carry out my physio exercises at home every day. The hospital will see me again in 3 months. Work has been fantastic and adaptions are in place to include a stand to seating desk, chair and wobble board. If you live near Bristol I highly recommend ' in Action' shop for equipment. I am still in a lot of pain and during the early days I wished I' never decided to have the surgery. Once the haematoma has broken down I may be in a better place physically and mentally. At present I feel I am experiencing the same pain as before surgery, it' just in a different area. Apparently it can take up to a year after a Coccygectomyto feel the benefits so I' trying to be optimistic but I am just so sick of this pain. It is limiting my life and the choices I make. Ontop of all this my mum died 3 days ago.

I would be interested to know if anyone else has developed a haematoma after having their Coccygectomy. If you have any further questions do not hesitate to contact me. 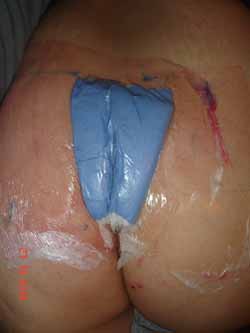 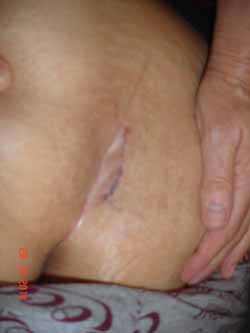 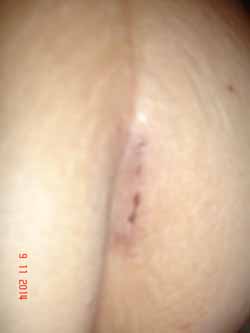 It has now been 10 months since my operation to remove my coccyx. I am still in severe pain. My follow up appointment at Southmead Hospital with my consultant resulted in me being sent for a MRI scan to investigate my pain.

At the MRI scan I was told that I would need a gadolinium which is where they put a dye through your veins so abnormalities are more clearly visible on MRI. The nurse had huge difficulty finding a vein and tried in 4 or 5 different places on my arms and hands. Then a consultant doctor was called any he too could not find a vein so I ended up not having the gadolinium just the MRI scan. I was left black and blue hands/arms which lasted 3 weeks and severe pain!

My MRI scan took place end July and although I was told that I would get my results in 2 weeks this is not the case. Apparently I have to make a further appointment to get my results (21st September 2015). I am awaiting my results.

It's been 3 1/2 years since my operation to remove my coccyx. Nothings has changed significantly. The operation was unsuccessful and I am in as much pain now as before the operation, it's just in a different area now. Nothing showed up on the MRI scan and my orthopedic surgeon basically signed me off saying there was nothing more he could do for me.

I was referred to pain management clinic who recommended I tried a tens machine. They gave me one to take home for a month but it didn't work. Then they offered the chilli patch capsaicin qutenza treatment which I had in February. I arrived at 9 am and the doctor drew around the pain area with a pen. Then he put tracing paper over the area and took a template. Then the chilli patch is cut to match area size and stuck on the area of pain. I lay on my front on a hospital bed for 1 hour. The first 10 minutes was O.K. Then it started to burn like hell on fire! I don't know how but I managed to survive for the whole hour. When he removed the patch and cleansed the area it carried on burning for 30 minutes. The pain subsided after a few hours. My husband drove me home and I took the day off of work. The doctor phoned me 2 weeks later to go through a questionnaire. Multiple questions where you rate your pain 1-10. The treatment did not work for me and I am gutted. I have a review meeting at pain clinic in May and I am going to ask to try acupuncture as this is the only treatment left that I haven't tried. Hopefully it is still available on NHS but I don't hold out much hope.

I don't know what more I can do. I paid Ł50 to get all my medical records and MRI scans to disk to hopefully go see a specialist in London but the doctor at Pain Management clinic advised me that I would probably be wasting my money so I haven't done this yet. I just manage to live with the pain. I have tried everything to help my mental state as some days I just want to crawl into a ball and hide in bed and give up. I started a healthy eating and exercise plan and lost 5 stone but the pain is still so severe. It's so debilitating. Somehow I manage to hold down a full time job but apart from a few visits to gym on evenings after work I am exhausted when I've finished work and don't really have a social life. I feel older than my years (44). I do try and make the most out of life as I have come to the realisation that this is permanent for me. If I didn't have children I probably wouldn't be here now. I sometimes think that I could be on this earth for another 30-40 years with this pain and that scares me tremendously. I am also sad that doctors have given up on me. Sorry my news is not more positive.