Large posterior bone spur on the tip of my coccyx

I have a "sit down" job, HAD a "sit down" evening/weekend hobby, and HAD a bad home computer chair. My pain onset went from 0 to 8 gradually over 5 months (Sept 2012 to Jan 2013) at age 40. To manage the pain, I would sit forward in my chair, cross legged, or with one foot tucked under the other leg. The tip of my coccyx became extremely sore to touch; otherwise the pain was intermittent. Initially I thought it was misaligned, however after a year of various treatments I am fairly confident my diagnosis is a large posterior bone spur on the last segment of my coccyx, 90 degrees backwards and 45 deg to the horizontal axis from sitting too much. Here is my story...

I began seeing my Primary Care Physician in Nov 2012 for coccyx pain, and he advised to take it easy and come back if pain persists. The pain got worse so I had a dynamic sit/stand X-ray in January 2013. Although the report said it was "normal", knowing what I know now, I can adjust the contrast and see the posterior "bump", see X-ray image. My PMP wrote a letter to my employer with the diagnoses of coccydynia and said I was to minimize sitting at work. A sit/stand computer work station was approved and they provided a coccyx cushion that I began using everywhere (Alimed Ergo Coccyx Cushion, Item # 710093, US$42). I began seeking specialists around Boston.

In March 2013, I found a pelvic floor specialist who ordered a MRI (report said "normal"). It was explained that the coccyx can be many different shapes, and since I didn't have a baseline MRI for comparison, the PF doctor could not say if it was misaligned. The doctor explained that if the small muscles that attach to the coccyx become overworked or stressed, they would "feel" like a bruise. They had me begin exercises to build up nearby muscles to relieve stress on these little muscles, and prescribed a topical pain killer + anti-inflammatory. We agreed that surgery was the last resort, only after all other treatment options were exhausted. The first non-invasive treatment was physical therapy, under the assumption that it was an alignment issue.

I went to PT 7 times over 3 months and it was beneficial in that it engrained in my head to always sit on my coccyx cushion, to roll out of bed safely, taught me stretches, etc. The appointments initially included internal exams where the PT was looking for tender areas that are typical of anterior misalignments. Treatment was to stretch multiple times per day and to allow the body to heal itself by not inducing pain on the coccyx (protecting it). The PT also used the taping technique a few times to pull the coccyx backwards. It was frustrating because internal palpation did not elicit the expected pain, and there was no acknowledgement of the real focus of the pain (tip of the coccyx with EXTERNAL palpation).

In August, I requested a re-read of the MRI, but instead a repeat scan was scheduled. This time, the diagnosis was either a posterior misalignment or a posterior osteophyte (bone spur, spicule). I requested a copy of the two MRIs, so I was finally able to show therapists what I had been describing to them. See both images below for comparison. Although I did not recall an accident, I was told that it was possible that I injured it years ago, and the body just moved it gradually as I got older or the muscles moved/grew differently causing the pain. I do remember feeling a bruised tail bone at least once in my past, so that resonated with me and I began seeking ways to move the TB back into alignment.

I saw a chiropractor three times (Dr. Jay Heney - see Doctors and specialists in the USA, Massachusetts). The first two visits he used the activator tool to try to get it moving back in the right direction. On the third, he performed the drop table technique under local anesthesia (given by PF doctor); unsuccessful, but interesting.

Concurrent with the aforementioned local anesthetic, I was given a drop of "DEPO MEDROL" (a long lasting corticosteroid anti-inflammatory). The pain went from 8 to 1 over a five day period, and remains at 1 three months after the injection. The hope is this will break the pain cycle, and possibly the pain will not return when it wears off. Finally I was able to touch the coccyx to really feel what is going on. I could grab the tip like a knob, and wanted so badly to move it "back into alignment".

Next I had a consultation with a surgeon at Mass General Hospital in Boston, Dr Wood (see Doctors and specialists in the USA, Massachusetts). He viewed the MRIs and repeated the dynamic X ray (described above). He explained that the coccyx, being a vestigial organ, can have 4 different orientations and that mine was the posterior type and had probably been in that orientation since birth. He also said that in the absence of trauma (such as a fall) it is not possible to explain the recent onset of pain, but the body does change over time. He also explained that treatment is a quality of life issue. As my pain had significantly reduced following the depomedrol, he suggested I continue to monitor my pain level, and consider surgery only if the pain returned to a level that disrupted my quality of life and couldn't be managed by infrequent injections (~twice a year).

He explained that re-aligning it straight is not possible since it has likely been posterior since birth. I am skinny so I feel it while sitting on a bench, but this will do no harm he said. I just didn't remember feeling that bump when sitting until recently so that theory didn't resonate with me.

At this point I did an internet search and found drawings of the 4 common coccyx shapes. They range from very straight to very angled, but none of them seemed to match how mine appeared on the MRI.

Then I went to 5 osteopath sessions with the goal to relax the muscles, aligned the body, and release stress up and down my spine so muscles don't try to over compensate. The intent was to get those tiny muscles back to their relaxed state, so the pain does not return when the steroid wears off. The common theme for all these specialists is that it is ok for my bones to stay this way, as long as the pain is manageable or goes away.

I scheduled out 5 ortho-bionomy sessions which were also intended to align the body. The treatment was to gently push the coccyx one way and hold for 5 to 30 seconds, then move it back the other way briefly. Do this every day to make the TB mobile, then the body should slowly move it back where it belongs, if it needs to move. I had two sessions and we didn't think it wanted to move. I cancelled the rest of the appointments after someone in the closed FB group recognized my MRI since it was similar to his condition, "that's a bone spur!"

I posted my story on the closed Facebook coccyx group and someone with the same condition as mine replied with a diagnosis after he saw my MRI posting. "I have the same issue. Posterior protrusion of the coccyx WITH a bone spur, and I can also palpate my coccyx in the same manner that you describe. ...the bone spur occurred as I entered my adult life, when I entered a field that required mostly sit down work. Prior work had been all standing."

I did some more research on bone spurs and found a MRI on this link that looks nearly identical to my situation. Case 6 (middle picture). "The case #6 is an interesting one: it is not a luxated bone, the coccyx is rigid and the spicule is bigger than the "mother bone" ". THAT makes sense to me since all models and images of the coccyx show that last bone segment is always the smallest. I made a rendition of the MRI in Photoshop showing what I think my coccyx looked like 1+ years ago, compared to what it looks like now with the large bone spur.

After a year of various treatments, I am fairly confident my diagnosis is a large posterior bone spur on the tip of my coccyx, 90 degrees backwards and about 45 deg to the horizontal axis from sitting with my legs crossed on a worn out computer chair for years. Bone spurs develop during trauma like this. I always crossed my right leg over the left, which may explain why the spur developed towards "high side", towards the right.

Now I always sit using a coccyx cushion, have a sit / stand desk at work, and have a standing computer desk at home. I will wait and see if the pain returns, and will follow the surgeon's advice.

5 week post-op update. The cortisone shot was wearing off, and the surgeon agreed to perform the coccygectomy. The pain went from 8 to 2, then at six months post-injection, it was back up to a level 5 before my coccygectomy. I woke up on my back with a foam donut underneath to protect the area. Wheelchair discharge (using my cushion) same day, and I was able to get myself in and out of front seat of the car, arriving home before the local lidocane wore off. 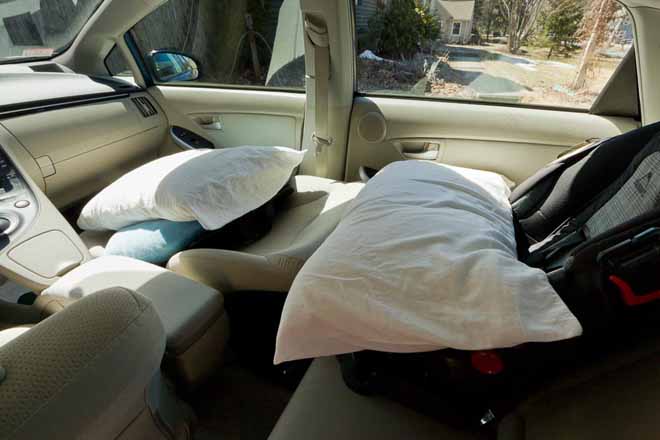 Once stitches came out, we wiped the area every day using a cotton ball with "Hibiclens" (antiseptic/antimicrobial skin cleanser).

I know many people have nerve and swelling issues post-surgery. I am fortunate to have neither complication. As noted in the tracker, I did a lot of walking during my 4 weeks off. No regrets. 1 week post-op I sat 5 minutes per hour, 2 weeks post was 10 min/hr, 3 weeks post was 15 min/hr. At 4 weeks I could sit 1 hour at a time. 4 weeks post-op, my pain level was 1 out of 10 (90% pain reduction). I could sit cross legged, but not ready to sit up from a laying position. Sitting was still a bit uncomfortable, but I managed the 45 minute commute by adjusting as needed. I starting working out at the gym, and pain never goes over 1. 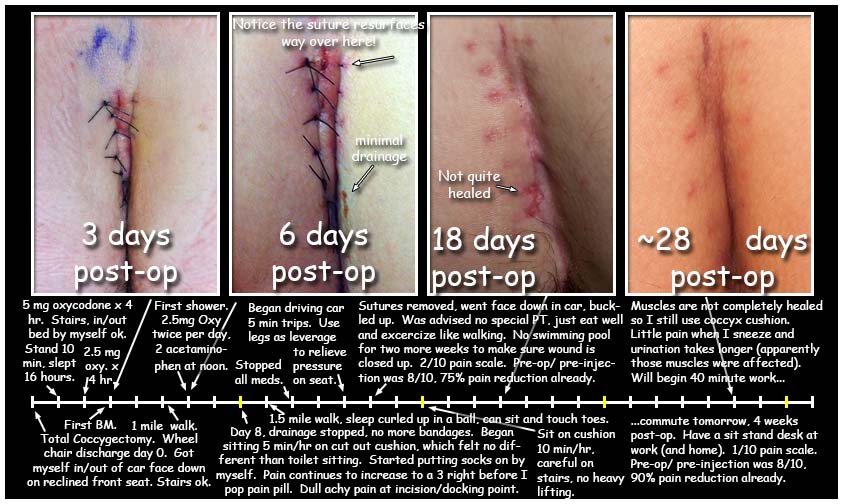