Physical therapist pushed too hard and dislodged my tailbone

I've had coccyx pain for 4 months after seeing a physical therapist. The physical therapist pushed down too hard on my lower back and broke my tail bone and dislodged it. I had an MRI which showed a broken bone. I can't sit for long periods of time. If I do sit, I have muscle spasms in my buttocks. My tail bone and lower spine also hurt. This also caused my degenerative disc disease, stenosis, arthritis, sciatica and bone spurs in my back and neck to flare up. I had awful headaches, shooting pains down my arms and legs. The pain was as bad as beginning labor pains and back labor.

I am taking Tylenol with codeine every 6 hours. I go to the chiropractor who does low laser, ultrasound therapy, percussor (hand held massager) and chiropractic work. I also go to cranial sacral therapy. I do my physical therapy stretches. I have to ice all day long. Heat makes it worse. I'm not able to get a cortisone shot because I have trouble with sleep and weight gain due to a medication that I take. I have tried Swedish massage which didn't seem to help with the pain.

I was hoping to get information to find out what I can do that will help. The chiropractic helps the best. I go three times a week to Hanover Chiropractic in Hanover, MA. They are great!

I am doing Lidocane patches (3 day), without doing these my tail bone pain would be worse.

I met with one physiatrist who doesn't specialize in tail bones. I am meeting next with an orthopedic surgeon whose in his 70's. I got his name through a friend.

The other supplement I forgot to mention I take is Knox gelatin. Knox gelatin or any gelatin helps with broken bones and arthritis.

The orthopedic surgeon I saw didn't see any abnormalities of my coccyx on my x rays and MRI. The x rays and MRI were all standing or laying down. My primary care doctor wouldn't give me a referral for a seated MRI. I had to get that through the physiatrist who noticed my tail bone was broken and dislodged on my MRI.

I had gone to get an x ray of my coccyx. I had a seated and a standing x ray. The technician didn't see any abnormalities. After I sat for the x ray my tail bone really started acting up. I had severe pain again. I'm still taking Tylenol with codeine every 6 hours. I'm still icing all day and night non-stop. I even wear ice packs in my pants to go out. I wear the wrap around ice packs when I go to bed. I hadn't sat for two weeks before the x ray other than going to the chiropractor. I don't plan on sitting again other than my trips to the chiropractor with a neck pillow to sit on. My physiatrist suggested I see Dr. Foye in NJ. It is a long trip for me. I'm not sure what to do at this point. I don't think I can stand to sit for the seated MRI. The pain is too much to sit even for five minutes on a hard surface. If anyone has any suggestions, email me. Thank you!

I have been able to get out to restaurants by sitting in a booth. I'm able to sit side ways. What I have learned is to not sit. Even if you sit on a coccyx cushion, you're still prolonging your healing. I was sitting on a coccyx cushion and having worse pain then when I wasn't. I am trying not to sit for 8 weeks. I found out it takes 8 weeks for a tail bone to heal. So far I haven't sat for 6 weeks. I am using ice packs that I can walk around with in my pants. They're used for coolers. They're called Freez Pak The Tundra. I put one in a plastic bag and put it over my underwear. Be careful not to put it right on your skin. You'll will get frost bite. I got a slight case of it. 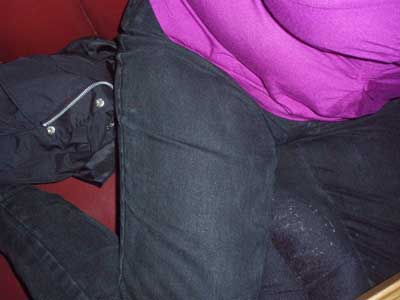 I am doing so much better with my tail bone! I'm able to sit on soft surfaces. I'm icing only once a day for 20 minutes! I'm not taking any Tylenol with Codeine anymore. I'm able to do physical therapy. I'm going to the chiropractor only once a week for an adjustment, low laser therapy and percussor. I'm still going to cranial sacral therapy once a week. I have found in this whole experience that not sitting was the answer. I saw one post where the doctor told the person not to sit for 8 weeks. That is what I did. If I did that in the beginning I would have been better faster. I only sat on a neck pillow to drive to the chiropractor and back. It was only 20 minutes up and 20 minutes back. I went 3-4 times a week.

I also learned to sit side ways as the Roman aristocrats did on their lounges. I was able to get out to eat that way. I was able to sit on a coach that way. I also learned to put two chairs together in a restaurant if they didn't have a booth. If I sat regular on a coccyx cushion or neck pillow in the beginning, my back wouldn't have gotten better. Also sitting on a pillow like my doctor said to do in the first place, didn't work at all!

If I continued to sit, I may have been a candidate for surgery. If I got the cortisone shot I would have been a candidate for surgery. I believe the cortisone shot only masks the pain. We all have pain for a reason and the reason is to let you know that you shouldn't be doing what you're doing. Cortisone masks the problem, so you do activities that aggravate your problem more! The Tylenol Codeine was great because once it wore off, I could tell where my pain level was at. The pain level was about a 6-7 with the codeine. Also, it didn't 100% cover up the pain, so I knew what I could and couldn't do. The ice was a huge help in reducing the swelling and pain. The supplements I took also worked. The physical therapy stretches I did before also helped. I held off on any strengthening exercises until the 8 weeks was up. I can almost sit on a hard surface now. I haven't tried it yet, but I will soon.

I hope this will help someone else so they won't have to go in for surgery!

I'm doing so much better now! I have no tail bone pain. I can sit in a hard chair now. I'm continuing to do physical therapy which has helped me out so much! I ice 20 minutes a day regardless and do all my stretches and exercises. I'm able to do the elliptical 30 minutes and danced last night.

The only thing I have still is the migraine headaches which started after I broke my tail bone. I'm having them daily. Is anyone else experiencing or had success in dealing with it?