Anyone with fractured coccyx and sacrum experience?

I'm a 35 year old female that was fairly athletic until December 28, 2005. On that day, I was bicycling and was broad sided by a SUV where the driver wasn't paying attention. As a result, I ended up with a type II segmental, angulated compound fracture to the tibia, segmental fractured fibula, a comminuted displaced coccyx fracture and a sacrum fracture. After two surgeries to my leg I can now walk again with the help of physical therapy. However my leg has not been the leading source of pain.

Since the accident I've had chronic pain in the coccyx and sacrum area. I was initially prescribed Percocet and recently Oxycontin, but I still am not able to sit or lay flat on my back. I tried acupuncture and manual manipulation of the coccyx with no long term relief. Then I went to a local respected spine surgeon who injected the fracture site with Lidocaine and this only brought relief for 2 and a half hours. He also prescribed me Lidoderm patches which have helped relieve a small amount of aching, but I'm seeking a more permanent solution. Where things become complicated is that the leg surgeon doesn't want me to take anti-inflammatories as they inhibit bone growth and he said it will be a long time before my leg is healed, so he prefers I stay off anti-inflammatories. The spine surgeon feels anti-inflammatories will relieve much of my pain, but doesn't want to interfere with my leg's recovery.

The spine surgeon asked me to wait until at least the end of June, which will be 6 months post accident, to see if I have any relief from the pain before I made a decision to remove my coccyx. I'm currently on disability and am desperate to return to a normal quality of life. Has anyone had a fractured coccyx and sacrum at the same time? If so, did you have a coccygectomy and were the results successful? If you didn't have a coccygectomy, how long did it take for you to feel better and what methods helped relieve pain? 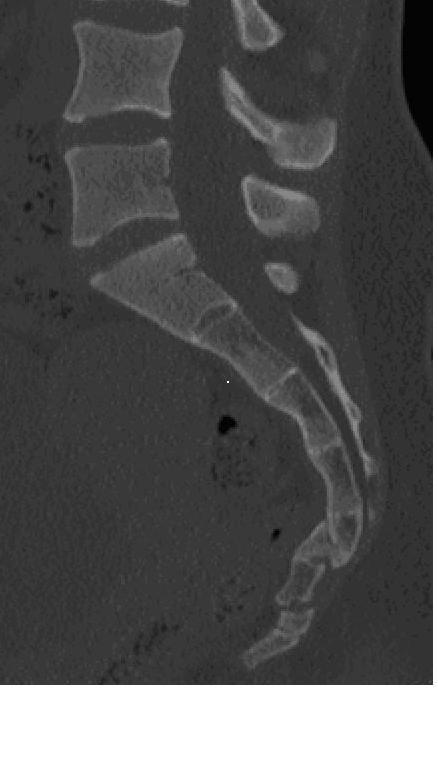 Success at last!!! About a month ago I received a cortisone shot. The injection site was extremely tender for three days, however it was well worth the pain because the ache improved each day for about 10 days. I also started taking Cymbalta (duloxetine), which has helped reduce the nagging ache the shot didn't relieve. The doctor said it's an anti-depressant that helps dull pain. I felt skeptical about taking an anti-depressant, but I took it anyway and was amazed at how well it removed the achiness. It worked so well I was able to go back to work part time last week where I've been doing great so far. I am working with my company's long term disability vocational rehab consultant that will be ordering me a special chair where you sit in it backwards and lean your chest against the backrest to help eliminate some of the pressure on the coccyx.

As far as physical activity goes, I'm still quite limited, but my outlook on life has vastly improved. Things that seem to aggravate my condition are: bending over, pushing down with my feet (such as trying to push a shovel into the ground with my foot), and attempting to pick up anything heavy.

I still cannot drive my 00' Maxima, but I can drive my husband's SUV. Our SUV's seat is more adjustable and can be made more level like a chair. Plus the SUV seat is a higher distance from the floorboard which also seems to help.

My hinny is still too tender for me to ride a bicycle again, but a friend gave me their elliptical trainer which has allowed me to get some cardio activity without irritating my tailbone. Swimming has also been a great exercise that doesn't seem to bother my hinny.

Special thanks to Jon and Jackie in NY for their suggestions and support.

Late last year I was feeling well enough to try to get back into some sort of physical activity, so I made the dumb move of getting back on a bicycle. My ride ended with muscle spasms, a very sore coccyx and new nerve pain in my pelvis area.

After that maneuver, I vowed to take it easy and didnĺt do anything physical to aggravate my condition. Yet the pain continued to increase. At times it felt like there was a football in my rectum and at other times it felt like a fist was holding my coccyx. The nerve pain in my pelvis was not that frequent, but was intense when it occurred. With increasing dosages and combinations of medication, I still couldnĺt seem to get control of the pain.

Finally, I made the trip to Baltimore to see Dr. James Campbell at Johns Hopkins (see Doctors and specialists in the USA). He asked lots of questions and performed a simple rectal and pelvic exam. Much to my surprise the pelvic exam was far more painful than the rectal exam. His findings were that I had pain along the region of Alcock canal extending to the ischiorectal fossa area up to the sacrospinous ligament. He concluded that I not only had coccydynia, but also had pudendal neuralgia. We decided the pudendal nerve was the first priority and if that didnĺt relieve the pain, weĺd continue with a coccygectomy.

At two weeks post op and I only feel very slight pain in the incision area. The overstretched rubber band feeling is gone along with the fist and football sensation in my rectum. Iĺm glad to state that it looks like I wonĺt need a coccygectomy after all.

One important note Iĺd like to mention is that Dr. Campbell is going to be retiring from surgery early this summer. He stated that he is one of only a few surgeons in the world with coccygectomy and pudendal neuropathy experience. If youĺve considering contacting him, I would recommend so as soon as possible.

Heĺs a wonderful, exceptionally intelligent and compassionate surgeon that I would recommend to anyone. With so much experience itĺs a shame that he will be retiring from surgery, but Iĺm hopeful that he will be able to share his knowledge with other doctors regarding coccydynia and pudendal neuropathy so that they can continue bringing relief to patients like us.

If I can help anyone with more information about this, please feel free to contact me.

Since my last update I wanted to share a new medication. I've found that Flector patches work far better than Lidoderm patches. They take effect faster and can be used 24 hours per day whereas Lidoderm patches are suppose to be used 12 hours on and 12 hours off.

A recommended doctor on your page from Maryland, Dr. James N. Campbell, is now fully retired. I've since found Dr. Mark Conway (see Doctors and specialists in the USA, New Hampshire) and recommended him to several women ľ all of which have given me positive feedback on him and his staff. He works closely with the Society for Pudendal Neuralgia (SPuN) and is a wonderful contact for people that think they may have pudendal neuralgia.

Here's the information on him from the SPuN website:

Dr. Mark Conway is an ob / gyn that is the head of the obstetrics and gynecology department at St. Joseph's Hospital in Nashua, New Hampshire. Dr. Conway has made multiple trips to Aix in Provence to learn the TIR surgical technique from Dr. Eric Bautrant and to learn Dr. Eric deBisschop's technique for EMG study of the pudendal nerve (pre-operatively and intra-operatively). Dr. Conway has partnered with Dr. Quesada (an anesthesiologist) and Lynne Assad (a physical therapist) to create the first comprehensive pudendal neuralgia treatment center in the country, offering conservative therapies, medication management, EMG studies, a surgical solution to treat pudendal nerve entrapment as well as comprehensive post-operative care.

I also want to recommend a physical therapist in Orlando, Florida that specializes in pelvic rehabilitation for men and women, Catherine A. Weibel (see Doctors and specialists in the USA, Florida). Her treatments for coccydynia and pudendal neuralgia have helped me quite a bit.

The bicyclists may appreciate learning about the moon saddle (see Cycling for people with coccyx pain) which helped me get back on a road bike. The moon saddle costs about $85 and has a 60 day money back return policy. It's designed to remove pressure on the coccyx and reduce pressure on the sacrospinal ligament and pudendal nerve.

Since my last update in April 2007, I've improved little by little each month. I can now drive all day and sit all day at work, but sleeping without pain medication results in a night of tossing and turning due to the constant ache. I've found Flector patches work faster than Lidoderm patches and can be used 24 hours per day. A couple months ago I found a physical therapist that specializes in pelvic rehabilitation and find it to be very helpful.

I'm happy to offer additional information for anyone that has questions.