Coccydynia due to osteoarthritis

I suffered with coccydynia for three years, with much the same story as others. My diagnosis was simply that I had an osteoarthritic sacro-coccyx joint. Did medication (minor help), physical therapy (excellent therapist in Manhattan, but only short-term benefits), electrogalvanic stimulation (not effective), cortisone of several types - including the use of fluoroscopy (initially helpful, but wore off over time).

So I pursued surgery with much fear and trepidation. Bottom line, I wanted a surgeon with the most experience possible. Much to my surprise there was a lot of misrepresentation throughout the USA. One surgeon in California (referenced within this website) purportedly had done "dozens", but had really only done several once I "dug deep" into the records. I ended up locating what would be for me the find of a lifetime. Doctor Dickerson, operating out of the Charlotte Spine Center, in Charlotte, North Carolina. He truly has done hundreds of coccygectomies over the years, and is truly a blessing. The procedure went flawlessly, and now, seven months later, I am 80% healed. Well, well worth the effort. He told me that he never had a patient regretful they had gone through the procedure, and is puzzled why so many make such a big deal out of it. As a spine surgeon, he says it's the most simple procedure he has to perform.

When he removed the coccyx he said there were four joints (he said there can be anywhere from 3-5), and they were fused (which is also not unusual), and finally he said that the trajectory of the coccyx was more vertical than typical, so it was acting like a ramrod against my sacrum when I sat down. Over years of this repeated offense, an arthritic condition (bone spurs) developed. Removal of the coccyx, removed the bone-on-bone pain that occurred.

I was on my way home, laying in the back of our van on a mattress the day after the operation, and never took anything for pain after that first day. I have attached some pictures of how I spent the next several weeks. I am not very good at being idle, and actually had as much fear about the "down time" as I did about the procedure. The laptop solution while lying on a massage table really did the trick. (I did watch some DVD movies on the laptop after a solid day's work.)

So, I recommend moving forward with a coccygectomy if there is a structural problem with the coccyx, and to find someone as experienced as Dr. Dickerson (704-339-1240 - ask for Linda Bergloff, his assistant - a really helpful person).

I thank God regularly, that we have the capability of resolving these problems, and that Jon created this site so that we can share our experiences with each other! 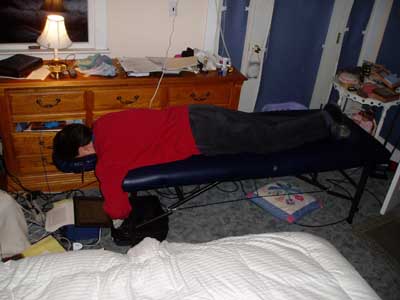 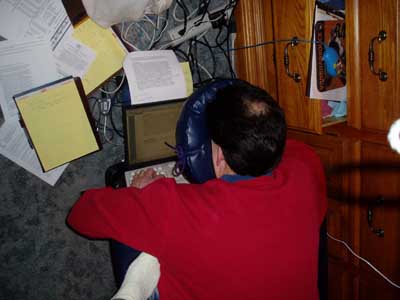 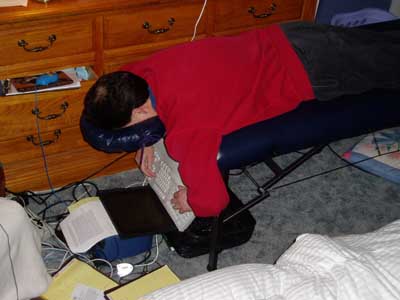