Pain disappears when buttocks are separated

I've had pain when sitting for three years now, growing worse all the time. I've had 5-6 cortisone shots without any permanent relief. All the time I've been under the impression that the pain comes from pressure on my tailbone, but now I'm not sure. Last week when it was so bad that I could hardly sit at all, I by chance found out that I have pain when my buttocks are pressed together and no pain when they're separated. By "pulling" my buttocks apart when sitting down I've been able to sit without problems for the past week, even in soft chairs. My doctor thinks that problem is in one of the ligaments that attach to the tailbone and that for some reason this ligament is affected when my buttocks are pushed together.

Does anyone have any similar experiences? I'm still trying to understand how my problem works and hope that someone can help me.

In the past year my tailbone situation has stopped getting worse. I've visited Dr. Maigne in Paris and he diagnosed me with a hyper-mobile coccyx. Understanding the reason for my pain has helped me to avoid triggering it, and that has kept it from getting worse. I've also been able to find/create seats that make it possible to sit throughout the day at work (see below, made from the back of a cheap IKEA chair), or during long car travels. I still have to do the funny procedure of pulling my buttocks apart when sitting down though, as my buttocks seem to be what pushes my coccyx out of place when sitting.

What is my biggest problem now is that I still can't sleep on my back. When in Paris I also met with professor Doursounian, to discuss a possible surgery, and he seemed to find it strange that laying on my back could cause pain. From what I've been able to gather from stories on this site, it seems I'm not the only one but it would be nice to have that confirmed. As my shoulders have gotten painful from sleeping on my side all the time, I'm kind of frustrated and getting more and more ready for surgery. Dr. Maigne has found me to be a good candidate for surgery, but professor Doursounian would rather wait and see. It seemed to bother him a bit that I didn't yet have a statement saying that my expenses would be paid for, even though I said I'd cough up the money myself if I had to. 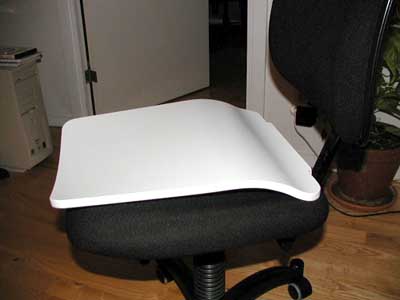 I had my coccyx removed yesterday morning. After years of coccyx pain which didn't improve, I got to see Dr Tycho Tullberg at Stockholm Spine Center (see Doctors and specialists in Sweden). He seems to be the only doctor in Sweden to perform coccygectomy currently. He examined me and came to the conclusion that surgery could help, so here I am three months later and 24 hours after surgery. Still at the hospital, but I am being released this morning. Tycho Tullberg and the clinic in general has been a very good experience, and I can highly recommend them.

I'm doing very well, and was able to go for a short walk outdoors only hours after surgery, and I can sit already. The best right now seems to be a tall chair similar to a bar stool, with a wooden seat without any cushion. While I did sit in a soft arm chair and watched TV for 2.5 hours last night, that was more painful and I had to wiggle left and right, and stand up every now and then.

I'm on the paracetamol and codeine combo pill, and don't feel any pain at all when typing this, sitting on that tall bar stool. Sleeping on my back last night did cause pain, but not unbearable and it was OK for a few hours before I had to roll over and lie on my stomach.


Today I'm two days post-op, and I haven't taken any pain killers since last night. I don't have any general pain, and can sit without problems on hard chairs, especially taller chairs which let my pelvis have a more relaxed angle. Softer chairs put more pressure on the wound and are less comfortable. I can only take a few minutes before having to stand up or move to a harder chair. The worst thing for me is to stand up after sitting for some time, but that pain goes away very quickly. Bending down to pick something up from the floor is also painful.

I've been shovelling snow and took a long walk in snowy Stockholm, without any real pain. I actually felt better after the walk, with less stiffness. I have a feeling that sleeping on my back will still be a bit painful though, so I plan to take two of the paracetamol+codeine combo pills tonight.

I'm 8 days post-op today, and have been in much less pain that I thought I would be. After leaving the hospital the day after surgery I've only taken painkillers on a few occasions. I've even been able to work since the third day after surgery, about 5-6 hours per day. My job allows me a great deal of freedom and I can mix sitting with standing and walking around. I made the mistake one day to wear slightly tighter pants, and that increased pain quite a bit. As loose as possible seems to be the way to go, and the pants need to be cut to be loose when sitting.

What I find a bit odd is that while soreness and stiffness have decreased significantly, I feel more of the sharp pain from the wound today than I did in the beginning. Maybe that's a natural part in healing, or maybe the stitches becoming tighter. The "old" pain seems to be gone though, so I really hope I will get well.

The one thing I can really recommend is to get a bean bag. I got myself a very large one that I can stretch out on. It's easy to find different comfortable positions and for me the pain goes away completely when I'm in it. There are other brands (Fatboy, Sacco) but Smoothy is very reasonably priced.

I'm just about 100% well now, but needed physiotherapy to recover fully after the surgery. Three months post-surgery I was making such quick progress that I thought I'd be fully recovered by six months. However, my pain actually got worse again and six months post-surgery my butt was really sore. I didn't have the same sharp pain as before surgery, but a more dull type of pain.

After a while I figured out that it came from some type of muscle cramps, and pressing the muscles around the coccyx base made them relax. As this only gave temporary relief I went to a physiotherapist who said that it's not uncommon for muscles to get a bit confused after surgery, causing an imbalance where some muscles won't work at all while others work too hard, which causes pain. He gave me some exercises for my pelvic muscles (same type of exercise which help people with incontinence) and they worked wonders.

It took a few weeks of exercise, but now I'm almost pain free and can sit for just about any length of time. I continue doing some exercise to make sure the muscles stay relaxed.