IN: The principles and practice of obstetric medicine and surgery

1847. The fourth American edition, from the enlarged and revised London edition. Lea and Blanchard, Philadelphia 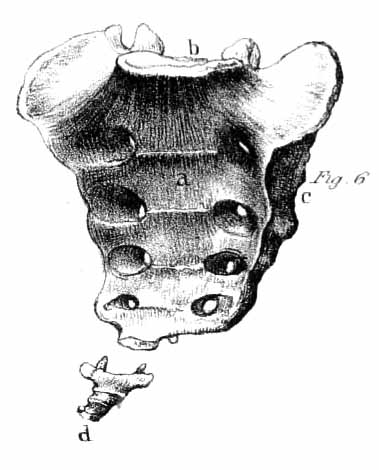 The os coccygis (d) appears like a continuation of, or an appurtenance to, the sacrum; but is of much importance in obstetrical study. It was denominated coccyx from its resemblance to the beak of the cuckoo. It is therefore, as the name would imply, in shape hooked and pyramidal: the base is placed upwards, the apex below. The bone is divided into three, and sometimes four, distinct portions, which play upon each other by separate joints. Externally it is convex and irregular, concave and smooth within, and terminates in a tapering point, which is bent forwards in the ordinary state of the parts to support the lower end of the rectum.

The coccygeal joints are of great value in the process of labour. Their mobility much facilitates the exit of the head, by enlarging the outlet of the pelvis in the antero-posterior direction. The increase of space thus gained amounts to an inch or more; for the point of the bone may be bent backwards to a line continuous with the sacrum, or even beyond, so as to form an angle outwards.

Occasionally indeed, the coccyx becomes anchylosed to the sacrum, and its own joints also are destroyed by a deposition of osseous matter between the separate pieces, so that their mobility is lost, and the bone becomes, as it were, a portion of the sacrum itself. Such a consolidation must offer a considerable impediment to the expulsion of the head, by contracting the pelvic outlet: and this, though a rare, is therefore another cause of lingering labour. It is most usually met with in women bearing a first child late in life, and those who have been accustomed to sit through the principal part of the day, as is the case with milliners.

When the coccyx is in this state, it will sometimes break in labour: this may happen as well during a strong, unaided uterine contraction, as under the employment of instruments. The occurrence of such an accident may be known, perhaps, by the attendant being sensible of the part having given way, while his hand was employed protecting the perineum: and perhaps by his hearing the noise peculiar to bones when fractured. I have seen three cases in which the bone broke, or the anchylosed joint gave way; in none of these did any permanent injury ensue. There was some pain and inconvenience for a time, but eventually re-union was effected, and the distress occasioned was inconsiderable. The best mode of treating such a mischance would be to keep the patient in a state of perfect rest, to interdict her lying on her back, to prevent, if possible, any external pressure on the part, and to keep the bowels moderately open. On the one hand, the frequent evacuation of the rectum, by causing almost constant movement of the fractured portions one upon the other, would interfere with ossific union: and, again, if the lower bowels became filled with hardened faeces, then expulsion would probably disturb whatever degree of reparation might have been procured. Thus, both extremes of immoderate action and excessive constipation must be avoided. In the management of the patient, not only should our object be directed towards obtaining a consolidation of the separated ends, but we should also endeavour to preserve the coccyx, as nearly as we can, in a continuous line with the sacrum; for it is evident, that if the junction take place while the point of that bone is directed greatly forwards, the size of the pelvic outlet will he lessened in the same degree; and in any subsequent labour a proportionate difficulty will necessarily exist. The coccyx is called vernacularly the huckle or knuckle and sometimes the whistle-bone.