English translation: A treatise of the diseases of the bones: London: printed for T. Woodward, 1726 (pdf, 28 MB)

The coccyx is the extremity of the spine, placed where the tail is in four footed animals, and has three or four vertebrae. The first is jointed at its body by a cartilage, with the end of the os sacrum: it has also two sorts of oblique processes, which join it to the os sacrum by a ligament. One may likewise observe in it two apophyses transversales; the two other vertebrae of the coccyx have no manner of resemblance to the vertebrae of other parts; they are mutually jointed between themselves, and with the first by a cartilage. These pieces together make a kind of raven's bill, convex without and hollow and crooked within, in order to sustain the rectum. It gives adhesion to the sphincter ani, and some part of the glutei.

What is commonly called a luxation of the coccyx is not so, because its junction is not an articulation by heads and cavities, but a union by cartilage, which the ancients called synchrondosis. However it be, it is very seldom that these vertebrae are entirely disjointed; which makes me believe that one ought to call their luxation outwards, overturning; and the luxation inwards, depression. If the coccyx were entirely separated from the os sacrum, it would be said the coccyx is broken, and not dislocated. But leaving the names, let us come to the things, and speak like the vulgar.

The coccyx dislocates inwards and outwards. The outward luxation happens only after hard labours, when the infant has stuck long in the birth; on this occasion the cartilages and ligaments that join the coccyx lose their elasticity, because they are too long forced, and stretched by the impulsion of the infant, which is itself continually thrust by the spring of the matrix, the strong contraction of the diaphragm, and the muscles of the abdomen, whence the coccyx at length not being able to resist any more, is forced outwards; and can't return to its natural position after delivery, because the cartilages and ligaments have lost their elastic virtue.

The coccyx luxates inwards from contrary causes, as blows, falls, etc. The accidents which attend this luxation are, a heaviness in the fundament, and a considerable pain, which is particularly felt when the patient goes to urine, moves his thighs, goes to stool, or coughs, spits, blows his nose, or sneezes.

The heaviness proceeds from this, because the coccyx, whose whole use is to sustain the rectum, finds its weight greater than ordinary, by reason its ligaments are painful.

The pain which the patient feels when he moves his thighs, or goes to stool, is caused by the gluteus major being fastened to the lateral parts of the coccyx, and the muscles of the rectum having part of their origin there likewise, whence it is always moved when the muscles act, either by the motion of the thighs, the rectum or the bladder.

The pain remains a long time, nevertheless this luxation is not dangerous, unless it happens to some cacochymic subject [one having unhealthy humours], and the bad qualities of the humours cause disorders which the luxation alone cannot produce.

I once knew a gentlewoman of 20 years old, who fell upon the ice, and got a very great contusion in her coccyx: she neglected her ail, shamefacedness not suffering her to show it till there was a disposition to gangrene. I bled her immediately, and relieved her so opportunely with topics, a regimen and general remedies, that she got quit of it for a superficial imposthume [abscess], which I opened, and of which she was soon cured.

Another happened not to be so fortunate, she had fallen upon a corner stone, which struck the coccyx near the junction with the os sacrum. The same bashfulness which was prejudicial to the former, was much more so to this; her pains indeed were not violent, but she felt an uneasy weight in the rectum, which became more considerable from day to day. She would not consent to be touched until her excrements could no longer pass through the rectum; having placed her upon the bedside in the same posture as one who is to take a glister [enema], I introduced my forefinger dipped in oil as high as I could into the anus. I touched with great difficulty a tumour of the bigness of a middling pippin; and with my forefinger of the other hand which I placed without near the end of the os sacrum, and the beginning of the coccyx, I discovered a fluctuation, which answered from one finger to the other as I moved them alternatively, which made me believe there was an imposthume [abscess]: the business was to open it (instead of preparing it, as some complaisant folks have proposed) having declared the danger of deferring it. The relations of the patient were of my mind, as she herself was also, the complaisant gentry were so likewise, and all out of complaisance.

I prepared linen rags, a compress and bandage; then I again put my forefinger into the anus with the same precaution, I even thrust it in farther. I touched the tumour a little better, and forcing it outwards as much as was possible, to bring the pus near the place where I had felt it, with the forefinger of the other hand, I plunged the point of an incision knife directly to the seat of the purulent matter, which issued out in great abundance; and the interior swelling disappeared. I put my finger into the wound, and I found the point of the os sacrum, and the head of the coccyx entirely bare and stripped of the peritoneum, as well as rotted by the pus, which drowned us with its quantity, and poisoned us with its stench. The head of the coccyx being entirely by itself, was separated and parted so as to give way for, and facilitate the dressings which continued for a long time, and had not good success, the patient died at the end of six months, by the melting of the grease of the pelvis renum [the basinlike cavity into which the ureter expands as it joins the kidney] by extraordinary suppurations, which were attended with a slow fever and a looseness until her death.

A lady by sitting down hard upon the frame of a chair, instead of sitting on the cushion, had a very great contusion over the coccyx. The pain was so great that she fainted, and when she was recovered from her swoon, she bathed her hurt in brandy, and was bled, but would not suffer her surgeon to search her. She was 45 years old, an age when bashfulness returns. She had a very bad night, her surgeon was called, and only let her blood again in spite of all the entreaties he used to examine her. The day was no better than the preceding night, and the next was yet worse. Day again appearing, she was bled for a third time, her pain in her coccyx abated, and another came at the labia of the vulva near the anus. Both the one and the other swelled in so short a time that in 24 hours the right lip imposthumated [formed an abscess]; the imposthume opened of itself, and fear determined the patient to suffer the proper openings; which done, she was cured without any inconvenience.

It is easily conceivable that if this lady had suffered herself to be governed, more frequent bleedings, and a regular management, might have prevented the imposthume.

All luxations of the coccyx are not subject to like accidents; I have cured a great many where not one has happened.

To reduce the coccyx when dislocated outwards, one need only thrust it inwards with one's thumb, and keep it in its right position with the graduated compresses (H) and a bandage (T) which must be placed in such a manner that the patient may go to stool and urine without taking off the dressing. 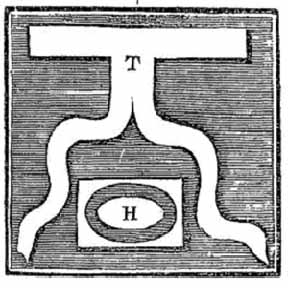 Spirituous medicines are very proper: I likewise use on this occasion a defensive, the method of preparing whereof I will lay down, as it was taught to me by the inventor of it. It was the late Mr Martial who was surgeon major of Tournay, in the war concluded at Reswick.

Brandy wherein a little alum has been dissolved, with spirit of wine camphorated, and a great many other remedies, may be made use of, not only in this luxation, but in all others. I am no admirer of oil; I have observed so often that it causes itching and an erysipelas [skin lesion], that I have left it off in all dressings of fractures and luxations.

To reduce the coccyx when luxated inwards, one must dip one's forefinger in oil of olives, or of sweet almonds, and introduce it into the anus as far as is necessary to get beyond the end of the coccyx, in order to raise it. The same remedies are applied; but one makes only a loose bandage purely contentive to keep them upon the coccyx.

The patient must keep his bed lying upon a roller or pad, during the whole cure; or if he rises, he must sit down upon a perforated chair that nothing may press upon the part; which would cause new pains, and perhaps a dislocation.