The American Journal of Surgery

A Englishman by the name of Simpson1 in 1859, gave an excellent clinical description of pain in the lowermost portion, tip, or tailbone of the spine. He dignified the condition by the now popular term "coccygodynia." He reviewed reports of injuries in the coccyx dating back to the sixteenth century, and then, suggested tenotomy of the ligamentous structures as proper therapy for the pain.

The first recorded coccygectomy was done in was done in 1726 by a Frenchman, Petit, for what was probably tuberculosis. Nott, an American, reported a case in 1844 and suggested surgical removal, which procedure was again stressed by Scanzoni in 1861. This was followed by a wave of enthusiasm for this operation when Beach, in 1899, characterized it as "notably unsuccessful." This was followed by a wave of conservative treatment which later was discarded as not wholly satisfactory.

Later alcohol injections were advised. Suermondt wrote in 1931 that epidural injections of procaine relieved some of his patients. In 1932, KIeckner2 injected a 5 per cent solution of quinine and urea hydrochloride subcutaneously about the coccyx at intervals of one or two weeks. He reported relief for patients so treated. Another method which has been quite satisfactory in our hands for the treatment of pruritus may also be suggested for painful coccyx, namely, the subcutaneous injection of 5 c.c. of Gabriel's solution of nupercaine (Ciba).

Hobart3 reports marked success with the manipulative treatment of coccygodynia. He prepares his patients "psychologically" and then anesthetizes them with nitrous oxide. With the patient on his abdomen the operator manipulates the coccyx between the index finger inside the rectum, and the thumb over the coccyx externally. This procedure loosens the adhesions and relieves congestion about the nerve plexus. Mock agrees with this procedure and believes all patients should with this procedure and believes all patients should receive the benefits of manipulation before surgery. More manual manipulative measures might mean making much misery milder, as certain cultists would have it.

Certain anatomic structures must be appreciated to have an understanding of the symptoms. The coccyx derives its name from a Greek word meaning cuckoo, based on the resemblance of the coccyx to a cuckoo beak. Colloquially it is called a tail or crupper bone. The four coccygeal segments are united in the adult to form the coccyx. In general the coccyx is a triangular osseus formation, the whole bone being curved in a forward direction it is concave in front and continues the curve of the sacrum. Caldwell and Moloy4 made a study of anatomic variations in the in the male and female coccyx and showed that the greater sciatic notch in the female was 13 mm wider than in the male. There is less tendency in the female to have the inclination of the sacrum and coccyx forward into the pelvic cavity. Therefore the male coccyx is more protected, being tucked in between the ischia and possibly explains the greater incidence of trauma to the female coccyx. The nerve supply of the region is rich.6 Spinal nerves supply numerous ramifications through the coccygeal plexus. Involvement of the sympathetic system through the ganglion impar offers opportunity for a variety of symptoms, (…text missing…)

The diagnosis of coccygodynia can only follow a careful history, physical examination, and roentgenography. There are so many other painful combinations in this tenderness of the coccyx. Passive motion should reproduce the pain in the complaint. Pain may be present during defecation or urination. The character of the pain is variable. It is not uncommon to see a patient sit with one side elevated to remove pressure from the coccyx. In differential diagnosis a pilonidal cyst is the most common lesion from which a painful coccyx is to be distinguished. There is usually a dimpling of the skin in a cyst, with a discharging sinus. Usually no pain is elicited on rectal examination because a pilonidal cyst is dorsal to the sacrum. Non- traumatic arthritis is to be excluded. A tumor of the cauda equina may cause referred pain to the coccyx, with sensory anesthesia and paralysis which may be flaccid or spastic. Childbirth trauma plays a minor role in the experience of most writers.

Duncan1 reported 278 patients with the complaint of a painful coccyx admitted to the New York Orthopedic Dispensary during a ten year period. Ninety-seven per cent were females, and 89 per cent recalled an injury to the coccyx. Under conservative management all but 3 per cent of the fifty-four patients followed up were relieved within six months. Thirty patients, or 11 per cent, had operative resection with relief complete in 74 per cent, partial in 9 per cent, and no relief in 17 per cent. Hamsa7 of Iowa reports 84 per cent good and fair results from surgical removal as compared with 62 per cent good and fair results in expectant therapy while treating cases of traumatic arthritis. Coccygectomy, in Hamsa's experience decreases the length of time required to establish a favorable end result and thereby establishes itself as an economic factor in treating coccygodynia.

The patient is placed on the abdomen with the foot of the table lowered. We prefer a low spinal anesthetic. The area is prepared with ether, alcohol, and tincture of merthiolate may be used if desired. The sacrococcygeal articulation is determined along with the tip of the coccyx. Rarely is it necessary to insert the finger into the rectum.8 The incision is made in the midline just above the sacro-coccygeal articulation and passes vertically downward, ending just below the tip of the coccyx. (Fig. 1.) 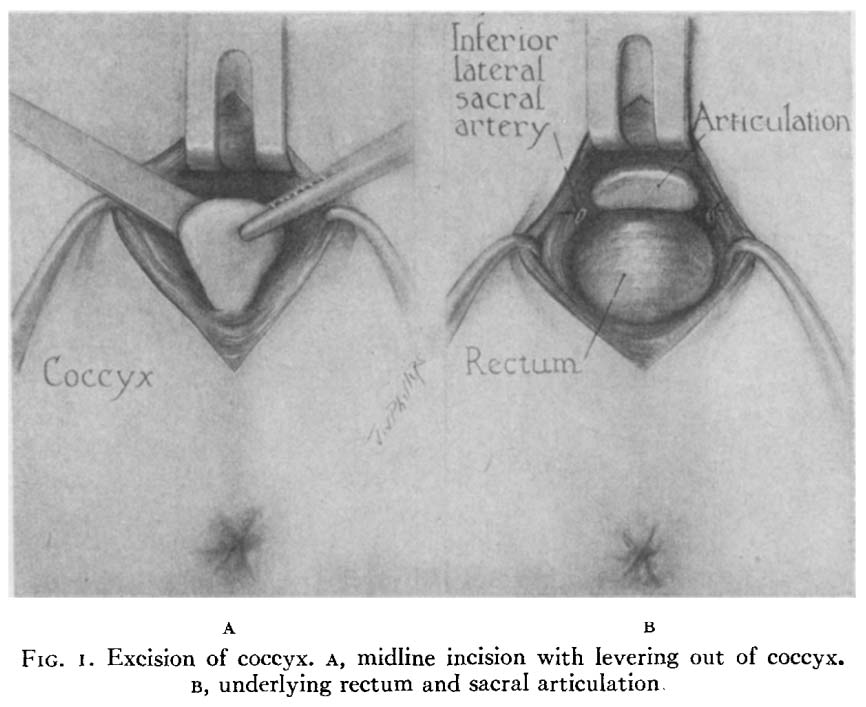 The transverse incision has been suggested because it is more removed from the anal opening and is less likely to become infected, secondarily. The elliptical incision appears to have no rational basis for use here and would appear to delay healing and result in a painful scar. The skin and fascia are incised through to the bone. The bone is usually more easily removed by freeing its posterior surface and lateral borders, then disarticulating and levering out its upper end. While the coccyx is being drawn backward, its anterior surface is freed from above downward, dissection being continued against the anterior surface of the bone so as to avoid injuring the rectum. (Fig. 2.). 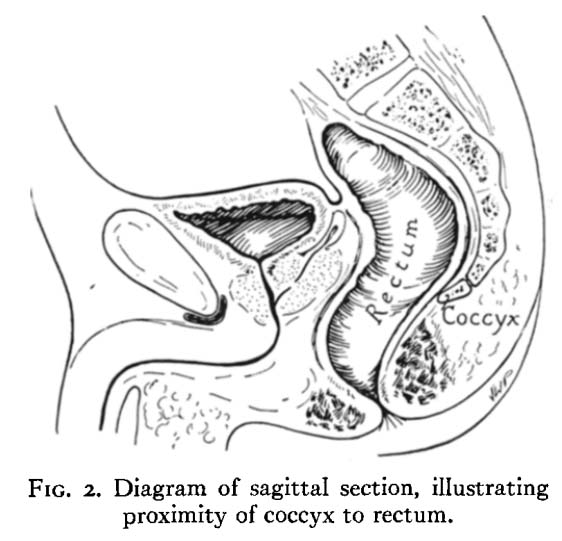 The tip of the sacrum is curetted or smoothed off with a rongeur. The lateral sacral arteries may be ligated separately, thus controlling practically all bleeding. The incised muscles are sutured together deeply with interrupted chromic catgut, and the superficial wound closed with dermal. A collodion dressing may be applied. The patient may leave the hospital in a few days.

Mr. P. (Fig. 3A.) This patient was a man of 65 years, who had a constant pain in his rectum for many years. He had a hemorrhoidectomy with no relief. Rectal examination revealed much pain on motion of the coccyx. X-ray showed lateral deviation of the bone. Excision of the coccyx gave complete relief from local pain but the patient still complained of a discomfort in this region, mainly because of a long standing cancer phobia. 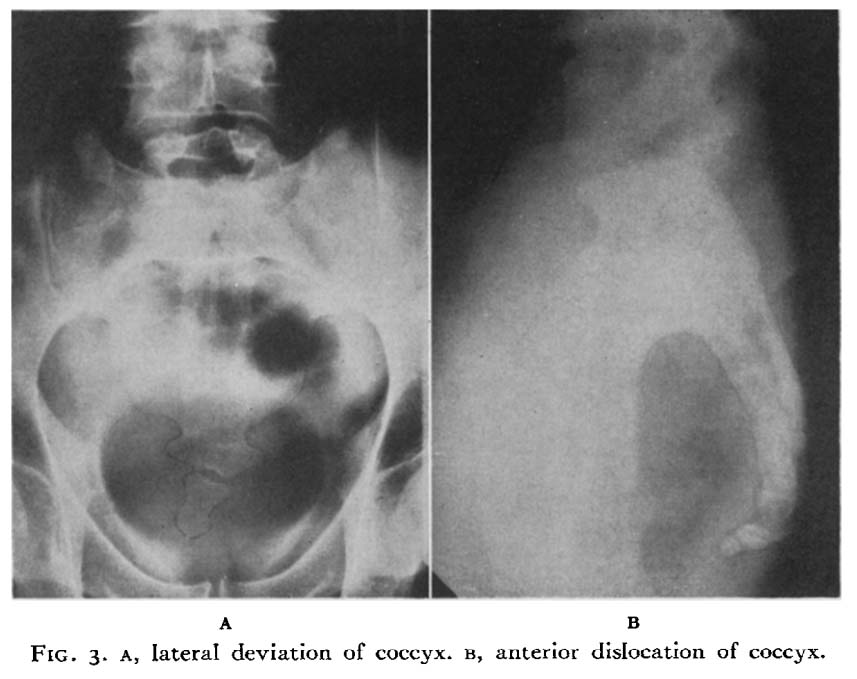 Mrs. A. (Fig. 3B.) This patient is a female aged 32 years, who had fallen in a sitting position and slid down several steps twenty months before examination. She was pregnant at the time. The baby was born prematurely but lived. The patient had severe pain since that time in spite of strapping and other forms of the masterful inactivity type of treatment. She had so much pain that she could not sit through a complete single feature movie, even with a cushion. The coccyx was anteriorly dislocated and freely movable, but was quite painful, particularly particularly at defecation. Removal of the coccyx gave complete relief.

FIG. 1. Excision of coccyx. A, midline incision with levering out of coccyx. B, underlying rectum and sacral articulation.