(Paper copied from conference proceedings published on the Web)

Abstract (added by Jon Miles, as the paper didn't have one)

320 coccydynia patients and 47 people without pain (called controls) were X-rayed both standing and sitting. When the controls sat down the coccyx moved by 0-22 degrees. Movement by more than 25 degrees (hypermobility) was therefore regarded as abnormal. When the coccydynia patients sat down, the coccyx moved by more than 25 degrees in 20% of cases. In another 28% of cases the coccyx was partially or wholly dislocated when the patient sat down. When patients were treated by injection of corticosteriod, it was found that 65% of patients with dislocation or hypermobility of the coccyx were improved or healed, whereas 27% of patients without abnormal movement of the coccyx were improved. Those that did not get relief from corticosteriod injections were offered coccygectomy, removing the mobile part of the coccyx. Eighty-two percent had an excellent or good outcome from surgery.

Because in the majority of cases, the coccygeal pain occurs only in the sitting position, we have develop a protocol to document the painful coccyx with dynamic films and coccygeal discography. Dynamic films are defined as X-rays films in the lateral sitting position (the painful position) as compared with standard lateral roentgenograms. Since 1992, 320 patients with coccygeal pain have undergone this protocol. The main lesions of the coccyx encountered and the various treatments will be described here.

"Dynamic exploration" consists in the comparison between a standard film and a "dynamic film", in a sitting (painful) position. The first (standard) film is taken in the lateral standing position. In order for the coccyx to be in a neutral position, it is very important for the patient to avoid sitting for the fifteen minutes preceding the X-rays examination. Otherwise, in some cases of hypermobility, there is not time enough for the coccyx to come back into the neutral position. The second (dynamic) film is taken laterally while asking the patient to sit on a hard stool with the back slightly extended from a sitting position, in a posture in which the pain is most pronounced. It is mandatory to wait a few minutes for the pain to occur.

Both films are superimposed on a bright light in order to compare and measure movement of the coccyx. This movement is measured in degrees of flexion or extension. Only the mobile portion of the coccyx has to be considered for this measure (fig. 1). 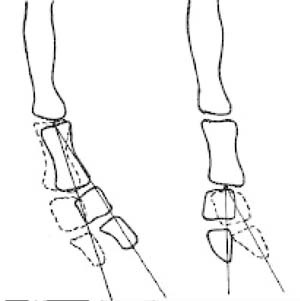 In a first study, the films of 51 patients and controls were compared and read by two independent observers at two different time intervals, the second reading performed one month later. The final value used was the average of the four separate readings. Inter- and intra-observer variations of the angle measurement were 12.5% and 15.3% respectively, and the accuracy of the measurement technique was +/- 2.6 degrees. This is therefore a reliable technique, in particular in view of the definition of hypermobility (see below).

The mobility of the normal coccyx

In a control group consisting of 47 painfree volunteers with no history of local trauma and no more than two pregnancies, the mean mobility (flexion or extension) was 9.3+/-5.7 degrees (range from 0 to 22 degrees). Thirteen coccyges (27.6%) had an extension between 5 and 15 degrees and eight (17%) a flexion between 5 and 22 degrees. Twenty-four (51%) others had a very limited mobility between 0 and 5 degrees. In two cases, there was a slight (asymptomatic) backward slipping of less than 20% (one fifth of the AP diameter of the vertebra).

Wether coccyges flex or extend in the sitting position (in controls and in patients) is based upon their position related to the horizontal plane of the seat at the very moment when the pelvis reaches the seat. Details and explanations have been given in another publication.

Standard and lateral sitting radiographs of 320 patients suffering from common coccygodynia for at least 6 weeks duration have been made since 1992. The patients were referred to our Spine Center in the Hotel-Dieu Hospital of Paris (France).

Luxation and subluxation : Sagittal luxation of all or part of the mobile portion of the coccyx while in the sitting position is the most striking abnormality observed (Figure 2, 3). It was noticed in 89 cases (28%). In nearly all cases, it was a posterior luxation, except nine cases where the luxation was anterior. The sacrococcygeal disc and the first intercoccygeal disc were equally affected. This luxation was spontaneously reduced in lateral decubitus, except in five cases, where it was permanent. 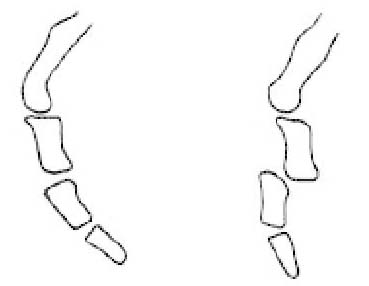 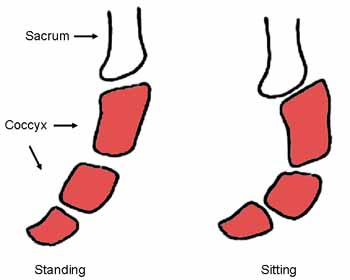 Patients with luxation had certain clinical characteristics, which set them apart from those with normal dynamic films. Their Body Mass Index was statistically higher. A history of direct and violent traumatism on the coccyx prior to the pain was more often found. An acute pain while passing from the sitting to the standing position, more intense than the usual pain felt in the sitting position, was found in 21 of 62 patients where it was looked for. They were patients presenting with luxation (14 cases) or hypermobility (7 cases). This never occurred in normals. This clinical symptom (acute pain when standing up) had a specificity of 100%, a sensitivity of 60%, a positive predictive value of luxation or hypermobility of 100% and a negative predictive value of 65.8%.

Hypermobility : Hypermobility is defined by flexion of the coccyx of more than 25 degrees in the sitting position (Figure 4). It was found in 53 cases (20%). The extreme and mean values in this subgroup were 25-70 and 35 degrees respectively. Hypermobility always occurred in flexion, and never in extension. 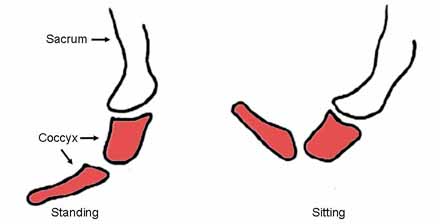 Fig. 4 : Hypermobility of the coccyx. On the left, sitting film; on the right, standing film.

Luxation and hypermobility can be interpreted as coccygeal instability similar to lumbar instability. It is of interest that contrary to the degenerative lumbar disc, the coccygeal disc does not sustain any compressive load which would lead to osteophytes formation, considered to act as restabilizing processes.

Coccyges with normal mobility : The remaining 178 cases (51.6%) exhibited a normal range of mobility (0 to 25 degrees) in the sitting position. Lack of mobility was considered normal, even when the coccyx was not mobile. These cases with normal dynamic films represent the actual "idiopathic" coccydynia.

The question raised by this finding (normal dynamic exploration in patients with coccydynia) is the source of their pain. We can just give some indications and hypotheses.

The presence of a rigid coccyx could sometimes lead to a phenomenon of chronic bursitis between the tip of the coccyx and the skin, this latter being compressed between the bone and the seat when sitting. Sometimes, a spur located at the dorsal aspect of the tip of the coccyx may be observed (Figure 5). It could also harm the subcutaneous tissues. Injection of these tissues with anesthetic may suppress symptoms, thus confirming the diagnosis. 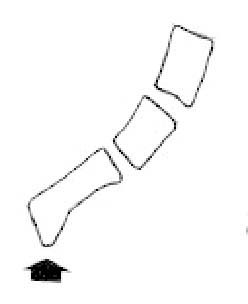 Fig. 5 : Coccygeal spur, which may harm the subcutaneous tissues when sitting.

Pain referred from other structures is another possibility. The sacroiliac joint or the lumbosacral area are sometimes advocated as a possible origin of coccydynia. These diagnosis should be evoked only if the coccyx appears normal after the dynamic exploration.

Psychogenic pain (hysteria or depression) is considered as a very common etiology. In this series, I have considered this diagnosis in a very few cases.

We have compared three sessions of coccygeal manipulations versus massages of the Levator Ani in two randomised groups (20 patients each, all without any previous local treatment, after oral consent), with a six-month follow-up.

Evaluation was made by an independent observer. Patients were assessed using a visual analogue scale, a verbal scale, and a clinical examination. The operator was blind to the results of the dynamic films.

Manipulations had poor results. Three patients were relieved at one month, but only one remained completely relieved at six months (5%). At one month, massages were efficient in five patients. They remained three at six months (15%). The difference is not significant. This study is going on with a third group, receiving a placebo of manipulation. The results will be published when available.

In a recent study, we have established that patients with luxation or hypermobility were better responders to a local intradiscal corticosteroid injection than patients with normal coccyges. About two months after the injection, 65% of the patients with luxation or hypermobility were improved or healed, whereas only 27% of the patients with normal coccyges improved. The technique of coccygeal discography is simple. The patient is asked to lie on his/her left side with the hips flexed. The skin is carefully disinfected. Each disc or synovial joint is entered with a 25 g, 25 mm needle under aseptic conditions, using a posterior approach through the midline, to avoid small blood vessels. We inject a very small amount of dye to control the position of the needle and a steroid. The injection is generally effective within one week. In case of partial relief, another injection can be done one month later. The abnormal mobility, if present, remains, but ceases to be painful.

Coccygectomy is used in the treatment of coccydynia ; however, the data found in the literature concerning the indications for surgery tends to be vague, inconsistent, and based upon subjective evaluation. This may explain why coccygectomy has been in and out of favour several times. We have undertaken a study in order to evaluate a novel - objective and rational - criterion for the selection of patients for surgery.

Between 1992 and mid 1996, we found one hundred and nine patients with coccygeal instability. They were treated conservatively (intradiscal injection). Thirty-one who did not respond and were severely disabled were offered surgery. Twenty-eight of the 31 surgical patients were followed up for more than one year. They had had pain for an average of 31 months. The dynamic films showed 17 luxations, and 11 hypermobility. The procedure was confined to the removal of the mobile bony element. The mean postoperative follow-up was 29 months (range: 12-53 months). Patients were assessed using a visual analogue scale, a verbal scale, and a clinical examination.

Results were graded as follows: Excellent: > 90% relief; Good: > 75% relief; Poor: < 30% relief. Symptoms tended to abate very slowly after surgery (mean time: 5 months; range: 1-10 months). Eighteen patients (64.3%) had an excellent result; five (17.8%) were rated good; while five (17.8%) had a poor outcome. There were two suture line failures, which did not pose any major problems. Two patients had had industrial accidents, and one was involved in litigation ; all of these patients had a poor result.

The results obtained show that it is possible to replace the previously used subjective and vague criteria for coccygectomy patient selection, by the objective criterion of poorly tolerated coccygeal instability.

Maigne JY, Tamalet B. Standardized Radiologic Protocol for the Study of Common Coccygodynia and Characteristics of the lesions observed in the sitting position. Spine 1996; 21:2588-93.