The term 'coccygodynia" implies a painful affection of the coccyx and the lowermost portion of the sacrum. The disease occurs almost altogether in the female, probably because in men the tubera ischii are closer together and the coccyx is thereby more protected.

Etioiogically, coccygodynia is most often due to the traumatism of labor, such as a difficult forceps delivery or the rapid passage of a large, hard head. This may lead to periostitis, subluxation, luxation, fractures, and in some cases to ankylosis. Other etiologic factors are falls, kicks, or repeated severe jolts by which the bone may be broken, the joints stretched, or the inserting muscles torn off. In other cases, a genital affection may be the underlying cause. I saw a young woman who had suffered with the most intense coccygodynia ever since her first confinement fourteen months previously, A surgeon and an orthopedist had been unable to give relief. I found a sub-involuted uterus in extreme retroflexion and cured the patient permanently by simple replacement of the uterus and insertion of a pessary.

Occasionally, a circumscribed edementous swelling is found as the starting point of painful sensations, presumably a rheumatic condition, but likewise present in caries, necrosis, or neoplasm of the coccyx. If no gross anomaly it found, textbook writers are only too prone to ascribe the condition to marked neurosis, hypochondriasis, or malingering. I deprecate this rather popular tendency of calling neurasthenia what we cannot readily diagnose, and I believe that in such an obscure case the primary cause is an irritation of the fine nerve branches which owes its origin to a long-forgotten traumatism. A preexisting neurasthenia or hysteria exaggerates the neuralgic pain, but it does not produce it.

In mild degrees of coccygodynia, the pain in the affected part occurs only at certain times, in some patients only during menstruation. In the majority of cases, however, the pain is constant and so severe that even the slightest motion of the coccyx is excruciating. Such patients can neither sit, stand, nor rise from the sitting posture without distress. They have to sit more upon one buttock than upon the other, so that the weight rests on one ischial tuberosity and does not reach the coccyx. Defecation and coition are likewise painful.

The diagnosis is made by palpating the coccyx between two fingers (Fig. 92) and locating the seat of tenderness. 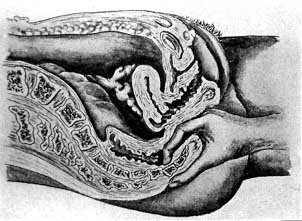 As to treatment, most authors favor the surgical removal of the coccyx, an operation which is neither difficult nor dangerous. In suitable cases the results are, indeed, very satisfactory but by no means uniform. Lomer, Rathjen, and others have observed failures from operation, and Brideau and Tissier have seen traumatic coccygodynias heal without surgical intervention. At any rate, the multiple etiology justifies a trial with non-operative procedure. Immobilization and rest are the prime requisites. Protracted hot sitz baths, with the patient on an inflated rubber ring, give much relief and may in the end effect a cure. Gentle massage is highly praised by Findley, Rose, and others. The bone is held between the forefinger in the rectum and the thumb on the outside; it is then moved backward and forward and the soft parts are moved about on the bone.

Kelly quotes Graefe who cured his cases by faradization in from five to twelve sittings. One pole is applied to the sacrum and one to the coccyx and the surrounding tissues. Seeligmann put one pole into the vagina and so cured a violent case of twelve years' standing with a single treatment.

Chartrier believes that gout causes alterations within the coccygeal canal which produce a constant pain in the second and third vertebra radiating into the spinal column and increased on bending forward, but not affected by touch. He recommends for this pain treatment with radium and the high frequency current.

The bowels should be kept soft and sexual intercourse interdicted. Blisters, counterirritants, and anodyne applications may be used over the site of the bone. Gilliam recommends a liniment composed of equal parts of oil of wintergreen and soap liniment, or the local application of tincture of aconite or unguentum iodi.

By strapping the buttocks together with a broad adhesive plaster, a natural pad may be provided until the above-mentioned procedures have been tried out. Beddard constructed a pelvic support with small rubber rings in which the ischial tuberosities rested.

Aside from all this mechanical and medicinal precedent, attention to the general condition is indispensable. Just because the severe and continued pain is apt to play havoc with an unbalanced nervous constitution, the psychic effect of the earnest attitude on the part of the physician cannot be overestimated.