Variations in Position of the Normal Coccyx 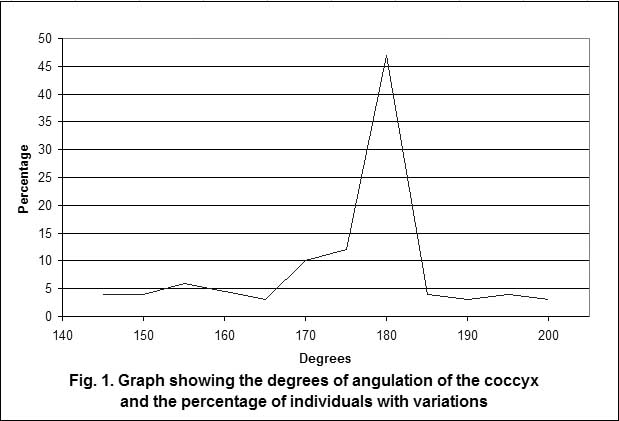 During the routine examination of patients in the X-ray Department of Bellevue Hospital for various pathological conditions unrelated to the sacrum or coccyx, it often has been noted that the coccyx was subject to many variations in position both in the sagittal and transverse planes. This observation has been common to all roentgenologists for many years and

does not present any new information. However, the medico-legal aspect of such variations in position has been more troublesome. It has been the experience of many roentgenologists who were called in to testify in courts concerning the possibility of traumatism of the coccyx to hear conflicting opinions as to the significance of the various coccygeal malpositions. It was, therefore, thought advisable that a study of the normal coccyx be undertaken to show that variations in position do exist and to study their incidence and degree.

A search of the medical literature shows that the normal coccyx has not been given much space or attention. The various current textbooks on anatomy describe it as the most distal portion of the vertebral column consisting usually of four, though occasionally three or five, rudimentary vertebra. The texts go on to describe the configuration and structure of the various segments, but little, if any, comment is made upon the occasional anomalies of position. Previous to the advent of the x-ray, the references to the coccyx in the literature are confined primarily to discussions of trauma to the coccyx; especially posterior displacement and the treatment therefore. Various textbooks on roentgenology have commented, if somewhat briefly, on the coccyx and its relations to the sacrum. Attention has been called to the fact that merely because there is a deviation of the coccygeal segments it does not necessarily follow that it is due to trauma. H. F. Johnson has pointed out that variations in contour, length, and alignment are common. The last three or four segments are usually fused together and arc frequently angulated forward at various angles. Lateral deviations are not uncommon, but are of no significance unless associated with complete luxation at the sacrococcygeal articulation.

In our study, 100 adults were chosen at random from the usual run of patients in our department with the prerequisite that they be free of any symptoms referable to the spine and that there be no history of trauma to the sacrum or coccyx. These patients were x-rayed in the anteroposterior and lateral positions. Lateral deviations were measured by drawing lines through the central planes of the sacrum and coccygeal segments and noting the angle between them. In the sagittal plane, the angulation was determined by drawing a line through the median planes of the last sacral segment, the first and second coccygeal segments, and measuring the angles between them. The angles were measured to the nearest five-degree deviation, as it was felt that this was.....