A Suggestion For Treatment Of Certain Forms Of Coccydynia

I have had occasion to treat a few cases of coccydynia in which the pain was so obviously resulting from pressure upon the coccyx, particularly whilst sitting, that I sought for some apparatus which would obviate this and prove not inconvenient in use. Three such cases occurred in nulliparous unmarried women with a history of pain coming on after sitting for a length of time, as, for example, in church or on a bicycle. Examination showed a prominence of the coccyx which would render it liable to pressure on an ordinary seating surface, and it seemed as though such pressure could be avoided if the tubera ischii could be maintained on raised supports.

I found that this could be effected by a simple contrivance made of fine longcloth shaped on the lines of a napkin provided with two hollow rubber rings to receive the tubera. The rubber rings are 1 in. in depth, 2.5 in. in diameter, their contained circles being 1.25 in. in diameter. They are held within circular pockets, which close with snap fasteners, with their centres 4.5 in. apart. The garment should accurately and closely fit the body, and be worn next the skin. It is kept in position by a broad silk elastic band (a) passing round the waist, and a similar band (b) passes across just above the pubes ; c and c1 are narrower silk elastic - they lie in the folds of the groins, and can be almost instantly undone or done up with snap fasteners.

The arrangement permits of the use of an ordinary diaper. The rubber rings do not cause noticeable projection when worn under ordinary clothing, as they take up a position below the gluteal folds when the patient is standing. 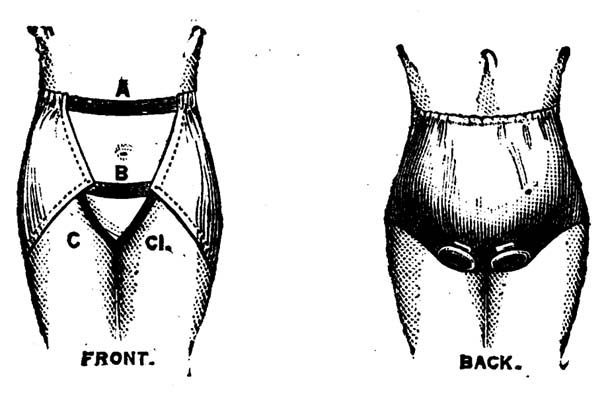 When a good-fitting model has been obtained it is as well to have at least half a dozen made, as the pair of rubber rings can be transferred from one garment to another in a minute, and thus a clean one can be used daily.

I have found decided relief from the severe pain of coccydynia has resulted in such cases as I have described, and the plan might be worth a trial by others who have greater opportunities for testing it than I have.

I have deposited my model with Messrs. Lindsey and Sons, instrument makers, Ludgate Hill.