Surgery done - but left with a sharp point

I have been going through this for over 10 years. Orthopedist, PT, Chiropractic, Steroid Injections, acupuncture all either no help or minimal, short term help. The Pain Management doctor suggests a neuro-stimulator implant. I take pain medication daily which keeps the pain tolerable but in recent years the pain has increased requiring more medication which causes me to feel, well drugged. My primary care physician gave me Cymbalta which surprisingly eased the pain a lot but I would wake up at 2-3 am each night... He said that I should wean myself off it & he would give me something else. Well it has been three weeks of brain zaps & fuzzy headed days. No way am I going on something else.

I decided enough is enough and started looking for an experienced surgeon, which Connecticut does not have. I found Dr. Kirkham Wood from Massachusetts General Hospital (see Doctors and specialists in the USA, Massachusetts). I went for a consultation this past Tuesday and the surgery has been scheduled for July 24th. Doctor Wood says that it is a simple surgery which takes him all of 5 minutes and I may be able to go home the same day. His study, Operative treatment for coccygodynia, shows an 85% success rate .. I am so excited. I will report back...

The surgery itself, two years ago, was not horrible. Because the hospital was a two hour drive the doctor arranged for me to stay overnight (justified because I have apnea). I was a bit confused when Dr. Wood visited me after the surgery because prior to surgery my understanding was that he was going to do a complete removal. When I spoke to him he said that he removed everything he could without a bone saw, huh? If it was fused I wanted it out, not left... He also said he cut too high which made it difficult to get at the coccyx, he's done over 200 of these, a little surprising, make me wonder if his student did the surgery. Even with a shot of morphine the ride home was no fun, stopped halfway for food, it was a good opportunity to walk around and take some meds. The two biggest concerns the first couple of weeks was cleanliness and constipation. Because the incision was up high it was easier to keep clean. The pain meds which I stopped taking in a week still bound me up really bad. Laxatives are your best friend, sorry about that.

I returned to work in 4 weeks, which was too early butt I was going crazy at home. It was tough because I have a desk job, I had to stand up a lot. I got through it with the help of tramadol at least twice a day.

After a couple months I really started feeling pretty good and was very confident. Butt slowly the pain started to increase and I could feel something moving when I sat down. I went to the pain clinic and had an CT SCAN which showed a seroma (fluid pocket) at the surgical site. I tried physical therapy and chiropractors to no avail. The surgeon said that it might go away or an interventional radiologist could try to remove the fluid butt it could refill. Dr Wood said that I will improve and he hasn't had any come back in 20 years and say it didn't work, not what I wanted to hear. So at present I am still in pain, taking pain meds 2-3 times a day. I have a sit-stand workstation which helps tremendously butt I guess my next step is another doctor in New Jersey to find out what can be done if anything. I dread another surgery. I still would have done it. ..

Yesterday I made a 6 hour drive 300 mile round trip to see Patrick Foye in Newark New Jersey (see Doctors and specialists in the USA, New Jersey). As a reminder I have been suffering since around 2000 and the thing that always comes to mind when I think back is the story in the Bible about the woman with the issue of blood in Mark "she had suffered much under many physicians", I have certainly suffered under many. I know they were doing what they could but honestly many of them had no clue what to do. An acupuncturist actually bled me, I could write a book, but I would prefer relief.

Chronologically Dr. Foye thinks that the first CT scan shows a possible bone spur at the end of my intact coccyx and potentially could have been treated with steroids etc if guided to that spot and , maybe, just maybe the next step could have been avoided. I had a coccygectomy in July 2013 and by February or March of 2014 I was once again in a lot of pain and could feel something moving when I coughed or sat down. I went back to the surgeon (Kirkham Wood) and he said I had a "small" seroma at the site I could have someone aspirate it but it could come back. He did not seem very concerned about my on-going pain and said something like "it take time" and "I haven't had anyone come back to me after 20 years to tell me they are still in pain", gee thanks doc.

Subsequently I had another MRI (attached) the white area where my coccyx was is a large seroma. Dr. Foye says it is probably the largest he's seen, everyone else minimized this... 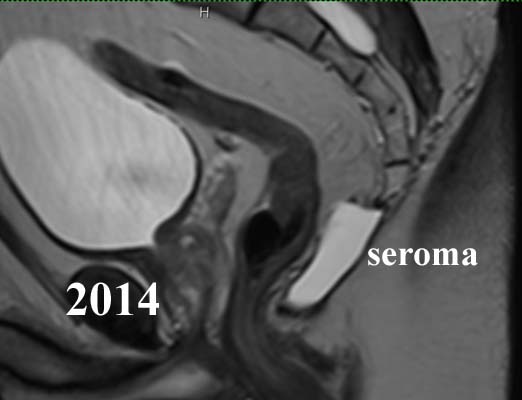 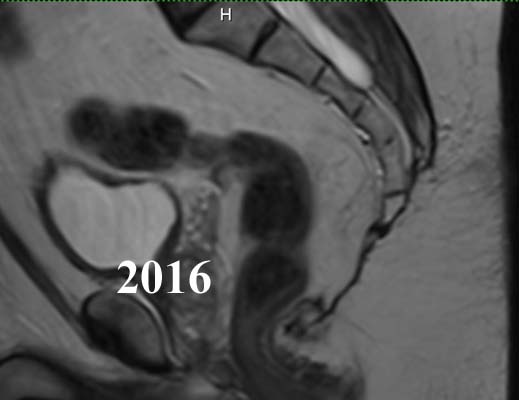 Now 4.5 years after surgery I have been suffering the same levels of pain I had prior to surgery, and actually increasing. I think the initial pain was because of the massive seroma, but now it is being caused by something else. In the 3rd MRI done nearly 2 years ago you can see that the seroma is gone you can also see that there is one segment of my coccyx left behind (it was fused so the surgeon left it).

The bad part is that he left it with a very sharp point on it. Dr. Patrick Foye was able to pinpoint this by images and a quick exam. He prescribed a twofold injection, anesthetic into the ganglion impar nerve hub and a steroid injection to the sharp end of my remaining coccyx bone all under fluoroscopy .

This was done before I left his office. We are hoping that the injection(s) will do the job and if so they can be repeated... What a difference a knowledgeable compassionate doctor can be… I put off making the trip to see him for years (stupid me) and I suffered for it. Now if the treatment does not work I will have surgery ahead but just the amount of knowledge I gained from listening to him was a balm to my heart.

I am still having a lot of pain in my coccyx, actually more pain. I really don't want to use stronger pain meds. I went to Dr. Foye in Newark NJ twice this year and had two Ganglion Impar injections w/o any real (long-lasting) results.

I am now looking at having another surgery to remove the sharp point that was left by the surgeon who did the coccygectomy several years ago. Dr. Foye, who really is a great doctor, referred me to Dr. Scott Katzman in Bridgewater NJ (see Doctors and specialists in the USA, New Jersey). I need to get a new MRI before I see him but sadly I need to do something. I will give you an update once I see him.

I had a "revision coccygectomy" at the New Jersey Spine and orthopedic center www.njspineandortho.com Dr. Scott Katzman was the surgeon. Dr. Patrick Foye referred me to Dr. Katzman.

First I have to say that Dr. Katzman was wonderful, confident, professional and obviously experienced. He told me that he "loves" doing coccygectomies and he's probably done more than any orthopedic surgeon he's heard of and that it usually takes him about 30 minutes to do the surgery. I do highly recommend him!

What he found when he opened me up was that the previous surgeon had indeed left on segment of the coccyx and a sharp pointy remnant of the second coccygeal segment. He was able to smooth and shape the remaining bones so they should not cause any further problems. However, more troubling, he found that the first surgeon had "cut too deep" and cut through the fascia the keeps the colon in place. This opening has allowed the colon to herniate into the space formerly occupied by my coccyx. He feels that this is actually the cause of my pain. I am sure that it is the cause of the chronic constipation I have been experiencing for the past several years.

I now need to seek out a general surgeon to do reconstructive surgery to correct this error.